Because Blancco solutions securely erase data from all IT assets, including mobile devices, HDDs and SSDs, LUNs, removable media devices, and more, it’s important that we know about all evolutions in storage technology, offering customers viable solutions that keep pace with the newer devices they need to protect. Here are some technology updates for the year ahead, as well as how data erasure can address an ever-changing IT landscape. 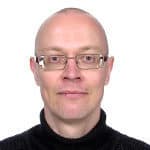 Lauri Lalli Research Specialist Lauri Lalli works in Blancco's Research & Development Department. In this role, Lauri is responsible for analyzing technology trends in order to understand the challenges and opportunities in the data erasure and information security fields. With significant experience in the data erasure and security industries and the accompanying technology ecosystem, Lauri has developed leading expertise in his field.

The June 2021 Ericsson mobility report estimates that there will be about 8.8 billion active mobile subscriptions worldwide in 2026. It also estimates that smartphone data traffic will reach, on average, 35 GB per month that same year, with the support of 3.5 billion smartphones using the 5G protocol.

5G connectivity will be a driving force for people to buy new phones, because older smartphones are not able to benefit from the high-speed transmissions that 5G offers. The Ericsson report states the transition to 5G will happen at different rates around the globe. For example, in North America, 84 percent of all smartphones will use 5G subscriptions in 2026, an increase from 20 percent in 2021.

As Blancco EVP, Products & Technology Russ Ernst shared in this Fast Mode article, “2022: A Year of Challenges and Opportunities for the Mobile Industry,” this process of people buying new phones will lead to lots of used smartphones getting to the second-hand market. This will also result in a good availability of used phones for people who are happy enough to have a 4G phone. Not only does this benefit consumers and sellers, this fueling of the second-hand market also keeps phones from heading to landfill.

According to IDC, global shipments of new smartphones will reach 1.42 billion units in 2022, and the trend is that the shipment numbers will increase every year; however, many of these new phones are getting increasingly expensive, leading many individuals to choose second-hand devices.

According to Statista, in 2022, the global used smartphone market will reach $52.7 billion (USD) in size. The Business Standard reports that the market for used phones is expected to reach $65 billion and 351.6 million units in 2024.

This growth opens huge opportunities for everyone involved in the mobile industry. In addition to the major market leaders for used and refurbished smartphones, Canada and the U.S., Japan, and China are forecast to record the quickest expansion rate through 2025.

As reported in our 2021 mobile research study, 5G technology updates have ushered in a mobile “super cycle.” Both new and used phones are in demand, which raises challenges, too: those involved in the buy-back/trade-in process will need to be able to scale data erasure and diagnostics to both protect consumer data and determine the value of devices fit for resale.

How ready are consumers to trade in devices online? Get the global research: Online Device Trade-Ins: Building Trust in an Invisible Process

According to GlobalData forecasts, the global Internet of Things (IoT) market was $622 billion in 2020, and it will grow to over $1 trillion by 2024, with compound annual growth rate (CAGR) of 13 percent over the period.

The IoT consists of wirelessly connected smart items, such as home appliances, wearables, cars, security cameras, utility meters, and medical implants. The devices have some sensors and upload data to the cloud. In both consumer and industrial applications, such devices generate and contain a huge amount of data, some of which may be sensitive.

If, for example, a smart fridge has been programmed to order more milk when it’s about to run out, it likely contains login details for a cloud service, which has its owner’s credit card information. When the house where the fridge resides is sold, there needs to be a way to erase the sensitive information.

Finally, wearable technology, a subset of IoT, continues to proliferate and affect our everyday lives. From fitness trackers, to smartwatches and even smart clothing, the worldwide wearables market reached a new all-time high as shipments reached nearly 445 million units in 2020, with 28.4 percent year-over-year increase.

These technology updates generate new opportunities for the data erasure market; however, the IoT market is still maturing, and technologies are very fragmented. For that reason, Blancco EVP of Products & Technology Russ Ernst urges consumers to exercise caution in protecting their data when devices change hands for continued use, or when discarding the devices entirely: change passwords and reset devices, for instance.

Drones and photo and video storage

New classes of devices with sensors and storage space are rapidly emerging. This Levitate Capital white paper estimates that in 2030, 9.6 million consumer drones and about as many enterprise drones will be shipped worldwide.

These flying devices have cameras that allow them to record video and take pictures, and the professional- and semi-professional drones are expensive enough that they have a second-hand market and are at risk of exposing sensitive data.

These consoles contain users’ account information, which is stored on the cloud and allows games to be purchased via credit card. Used consoles are often sold to new owners, with little regard to risks involved. Anecdotal information leads one to believe that the consoles should be erased before resale, but currently, no software exists to perform such an action.

Pros and cons of each

Solid-state drive (SSD) and hard disk drive (HDD) erasure, however, is certainly possible, even on advanced drives. And that’s good news. According to StatInvestor, 330 million HDDs and 360 million SSDs were shipped to companies and consumers in 2021.

According to this Tom’s Hardware article, globally, nearly 60 percent of new consumer PCs shipped in the first quarter last year used SSDs. That is understandable, as a computer with an SSD is much more responsive compared to a computer with only an HDD.

Erasure of HDDs and SSDs

The ability to erase HDDs has been around for a while. However, newer SSDs (NVMe drives, for example) have presented challenges to organizations wanting to ensure data removal from their used hard drives. While traditional data wiping and physical destruction can leave information behind on SSDs, secure data erasure completely removes data so that it’s unrecoverable. Not only does this free more devices for secure reuse, preventing them from being sent to the landfill, it also ensures data security during transport, no matter what the destination.

As new SSDs continue to hit the market, and other devices expand their data storage capacities, it’s important that your organization has the right data sanitization tools in place to ensure data is erased completely from the widest variety of technologies.

Offloading a batch of drives for resale? Removing all data is critical: Privacy for Sale: Data Security Risks in the Second-Hand IT Asset Marketplace

How is Blancco Responding to These Technology Updates?

Blancco’s in-house research and development team keeps a keen eye on these and other emerging and popular technologies and the opportunity they represent for secure data erasure. We developed the first patented SSD erasure method, overcame data erasure challenges for Mac T2 and M1; developed tools to erase Chromebooks through automated processes; increased efficiencies across drive erasure tools; and expanded mobile market opportunities—all while equipping customers to securely reuse or sell functional devices.

To learn more about how Blancco innovations support our enterprise, ITAD, and mobile customers, browse our Case Studies section and follow us on social media (LinkedIn, Twitter, Facebook) for the  latest developments.

Businesses trust Blancco for complete, secure, end‑of‑life data erasure across a variety of technologies. See why.

Need to Erase Mac T2 Devices? Blancco Has You Covered.